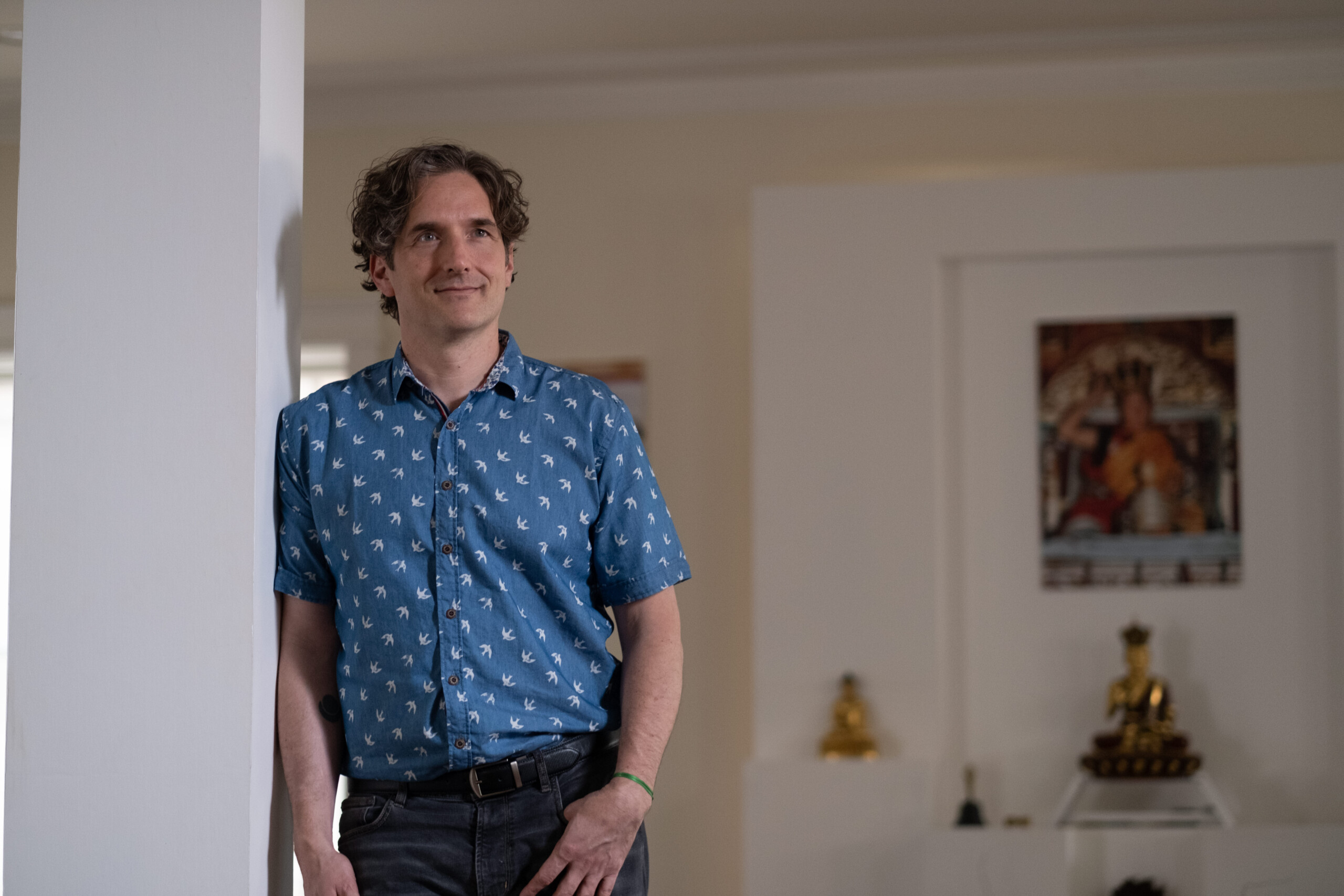 I was born into a Christian tradition but had more or less lost interest in that as a source for the truth by my teenage years. I was always drawn to science and studied engineering at university, and part of what directed my studies was a belief that I could find some level of explanation of the world through that. You could say I was fascinated by the idea of the ‘Universal Theory of Everything.’ But at some point in my final year of undergraduate school and into my first years of grad school that I started to question whether I was on the right path. Perhaps I just wasn’t very good at quantum physics, but when taking those classes I kept coming back to the notion that the truth should be simple, not something that required pages of probability equations to approximate. At that point I decided to look again at what religion might have to offer. After a few failed attempts at reading the Bible and some other religious philosophies, I came across Buddhism. You could say I found what I was looking for in the first text I read – the logic was clear and simple and fit my experience. I met my teacher a couple years after that and never looked back.

And Dynamite Buddhism, we talk a lot about the teacher, friend and the teacher is the most important thing in Virginia voters and pretty clear that’s that’s where the example is of enlightenment, that’s where the transmission flows through. But like when I’m looking really honestly at my own experience, I would elevate the Sangha to the same level, really right? And you know, and again, ultimately, the teacher of courses is everything but the Sangha, to me, has been as important and extremely important. And what I mean by that is, you know, I I don’t I wouldn’t be doing this if it was just all right. If I if I am honest with myself, I had just met all that and I probably would have gone back and, you know, gotten lost the inspiration after a few weeks from that course and gone about my own life. And who knows, maybe every once in a while got back into it, picked up a book, but it was really the Sangha. That actually is what motivated me to to to do this right? The practice. And shortly after this was November, then I saw them all. And then in January, as a New Year’s retreat, so December, January in Minneapolis, Fred and I decided to go up to that to see the Minneapolis saga. And that was one of these kind of real diamond way special events, right where I think, as I say, special events like truly unique to what we do as Diamond was not always centers along the way, has a lot of students of his that he had been practicing for some time that he’s asked to teach. And in the early days, at least in the Midwest, it was we didn’t have any. There’s only one teacher in the whole U.S. and he lived in New York. But we had there was another actually correct myself. There was two of them, one in New York and one in San Francisco. They were both students that both met all day in Europe. So they were like home grown students. And that was a lot of what he’s been active since the early 1970s in Europe, and he’s a lot of students that have been practicing 2030 years as a result of that is Europeans. And so he was one of the things that he would do is we send the students over to the U.S. or to a lot of other countries to to help to answer people’s questions and be the example and guide them right. And so that was what we had in Minneapolis in that new year was actually the guy from San Francisco was Davis and his he and his wife had been asked by all that attention they were. They were giving their course there. And then the Minneapolis song, there were a bunch of people around the similar age to me. I, they just met along the way within, you know, five years prior or something like that. And so it was kind of a group of 2030 people and know people from Madison, Wisconsin, go up there and lacrosse Wisconsin, which is another kind of key center in the in the early days of the time away in the Midwest. And we all got together at this course. And, you know, it was just that feeling of like all these people, these people are so cool and it’s everybody that really inspired you was like super friendly, everybody critical minded, you know, very , very all different types of people. And I, you know, wasn’t like everybody was from the same cut from the same cloth, but in the sense that it’s all like family, right? It was everybody was on the same page with with certain what was important to them in their life, right? And been very open and just friendly, right? And you know, I think there was one guy in particular named Eric, who up there is, he’s now a teacher, but he, you know, he had this really special quality of just making me feel like he’s known you forever, right? He was new to he was probably only in a couple of years at that point. But, you know, I just remember him like remembering my name the first day. I mean, like, you know, you know, asking me being just taking a real interest in me, right? And those kind of things, you know, then you get to know the people and you get the teachings and then you hear about practices like the refuge and non-drug practices. And you get you get a lot of that information and you get really that’s I think at that point, I was really inspired to to meditate, write and actually see it. And I think really like if it had been just meeting level here and there’s no song go there, right? That wouldn’t work. It wouldn’t work for me. I would wouldn’t have had that over as much as I have the confidence among all you have, that openness to him is a lot of obstacles. You have to overcome yourself to actually get on the cushion and do it every day, right? And that’s where the the Sangha really is. The inspiration, I think. And there’s a lot of, you know, sadness stories, I think throughout. My time that you know, that I can kind of point to that really was the song of that is what kept me coming right as opposed to the teacher, right? Again, ultimately the teacher really, you know, I can’t overstate the importance of it, but I think that to me, the song is just has been really critical.

I have been practicing Buddhist methods now for close to two decades, so it is a challenge to look now at how my daily experience is influenced by the path. Without a doubt, my practice greatly influences how I view and interact with the world in personal and professional relationships as well as with strangers. What comes to the front of my mind now in thinking about this now are really two things: compassion and joy. For example, I am not exactly living out the career dreams I had as an idealistic young man. Like many, I had hopes that my career would be something of great benefit to the world while also being immensely satisfying. It was sometime after meeting the dharma that I realized that those ideas were not important. There is joy to be found in every moment, and even a mundane job can be used to bring benefit to others. I certainly have not perfected that practice, but I can truly say I continue to try to hold that view to this day. 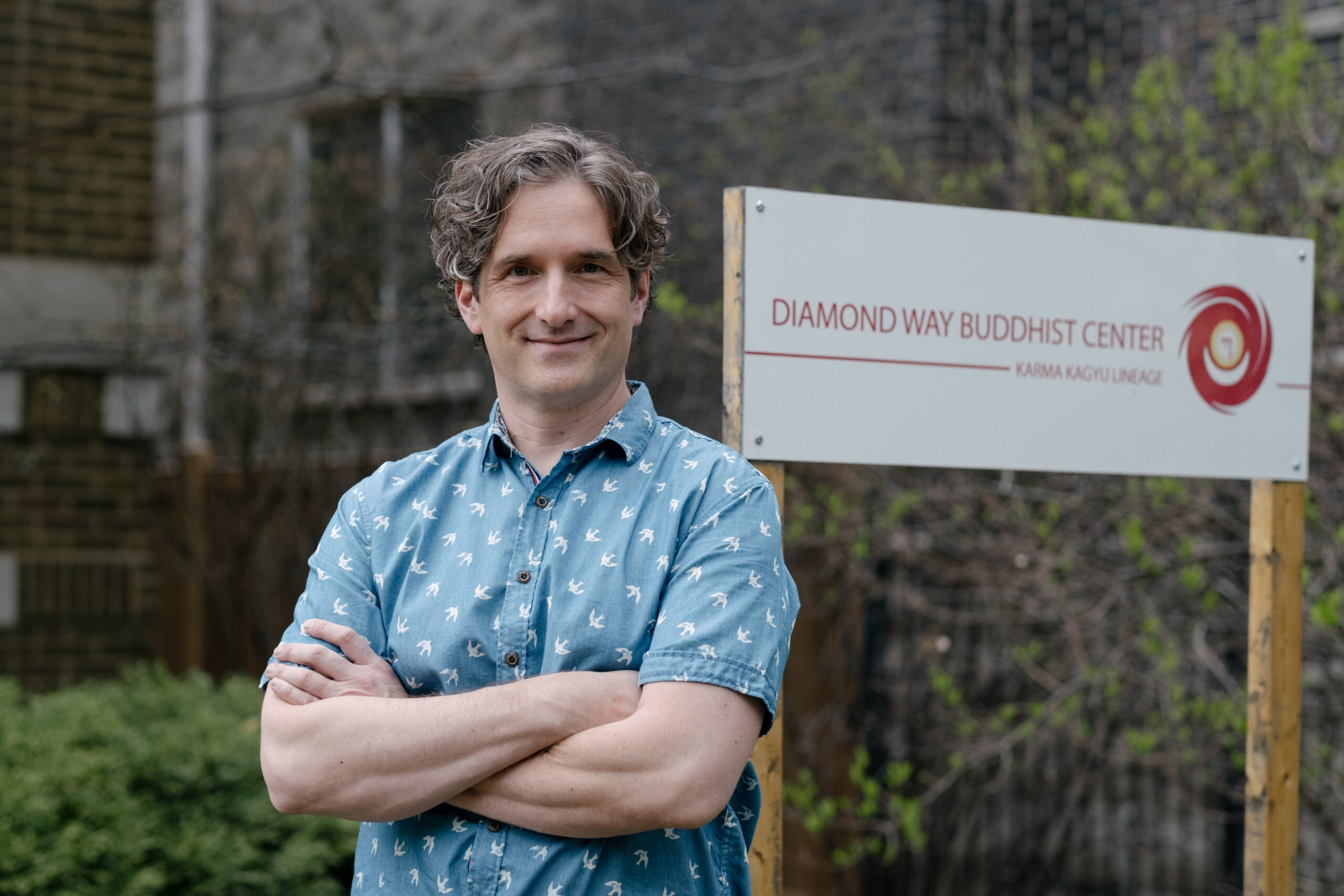 Ben resides and leads
the center in Chicago
for a number of years.

I practice Diamond Way Buddhism under the guidance of Lama Ole Nydahl, which is in the Karma Kagyu school of Tibetan Buddhism. Prior to meeting Lama Ole and Diamond Way, I did not practice with any other teachers or spend any significant amount of time using any Buddhist methods from other schools.

Lama Ole has a profound influence on my practice. He is my root lama. Prior to her death, Lamini Hannah Nydahl was also my teacher. All the methods I use come from Ole and Hannah. Lama Ole has had hundreds of students since the time I met him, and while I have seen him many times over the years and even traveled with him, I have never had daily personal interaction with my teacher. This actually has challenged me to develop confidence both in myself and in teachings and methods, and for this opportunity I am extremely grateful.

Lama Ole is fond of saying
“Highest truth is highest joy is
highest level of functioning."

I work as a metallurgical engineer in the steel industry. My degree is actually called Materials Science and Engineering. So that way, you could say I am a professional materialist, and there are some practical challenges to applying the teachings on emptiness to my work 🙂 But what I do instead is apply the teachings on compassion to try to build up my colleagues, and try not to take things too seriously and instead see the richness in things, to have fun and create a joyful workplace.

What teachings/practices have had the greatest impact on your life?

Lama Ole is fond of saying “Highest truth is highest joy is highest level of functioning.” You might call this his mantra. To me this is the most pith teaching I’ve received. Everything you need is there.